Home > Chamber News > The music is back in downtown Macon 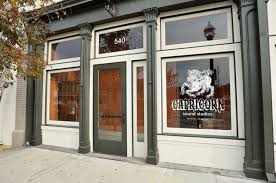 The music is back in downtown Macon

Macon’s downtown has undergone a revitalization that few would have thought possible just a decade ago.

“There have been a lot of partnerships over a long period of time that have gotten us to this point where things are really popping and unquestionably, we passed the tipping point,” said Josh Rogers, president and CEO of NewTown Macon, the downtown area’s economic development agency.

The once vibrant city center fell on hard times with the building of the Macon Mall in the mid-1970s and the flight of businesses to Macon’s suburbs. But downtown today is evolving. Storefronts are filled, people are living there again and there is a vibrant nightlife, Rogers said.

One of the best examples of downtown Macon’s renaissance is the rehabilitation of the long-shuttered Capricorn Recording Studio on Cotton Avenue. The four-building complex was acquired by brothers Phil Walden and Alan Walden, and Otis Redding in 1967 as the home for a new record label and studio.

If Macon was the birthplace of Southern Rock, Capricorn was where the sound was captured for the world. The likes of the Allman Brothers, Wet Willie, Elvin Bishop, Marshall Tucker Band and others recorded there before the label went bankrupt in 1979.

The buildings were bought out of foreclosure with grants from the Peyton Anderson Foundation. Mercer University took over the structures and recently completed a total rehab. Along with the original studio, the newly named Mercer Music at Capricorn is a 20,000-square-foot complex with a museum focused on Capricorn and Macon’s music history, and music incubator space including rehearsal rooms. In addition, the Lofts at Capricorn, a set of high-rise apartments wraps around three sides of the old buildings.

“The historic studio is pretty much intact and looks as it did in the 1970s, when Capricorn recordings were made here,” said Larry Brumley, Mercer’s chief of staff, who led the project for the university.

A large section of the building’s ground floor is occupied by a software development center created by a partnership between Mercer University and Robins Air Force Base. The center will create a working relationship between the 402nd Software Engineering Group, and the computer engineering and computer science departments at Mercer.

“Ultimately, the idea is to get our students and faculty down into that lab on a regular basis,” said Allen London, Mercer’s senior associate vice president of university advancement.

Robins, which has one of the largest rosters of software engineers in the state, was seeking a space with access to commercial-grade networks. “Air Force networks are very protected and hard to connect to externally,” said Bob Herrmann, director of the 402nd Software Engineering Group. “From that standpoint, being outside the government entity as far as an architecture is advantageous to us to be able to do cloud development.”

Being in a vibrant downtown area will attract tech talent who tend to favor working in urban walkable environments with ready access to retail and entertainment, he added. These areas are increasingly drawing both millennials and older retirees. “Many of the folks you see downtown today actually live here,” said Rogers. “In 2000, there were just 28 loft units in the district. Now, there are 651 along with several hundred units of student housing or low income units.”

Beginning in 2012, NewTown Macon began lending to developers to encourage downtown projects, about $15 million so far, according to Rogers. Those efforts have produced about 50 new restaurants downtown, music venues and bars, a couple of new breweries, and more retail and residential lofts.

Saving historic properties downtown is part of the organization’s goal, he added. NewTown Macon bought and renovated Bibb Theater and the retail space next door. Although the venue had long been empty and was rapidly falling apart, it was an often photographed site for tourists and locals.

One driver of the downtown revitalization was the completion of the 11-mile Ocmulgee Heritage Trail, which flanks both sides of the river throughout downtown.

“Being able to connect the river and these walking biking paths is really a critical amenity,” said Rogers. “The trail was the project that proved we could work together to get things done, and if it weren’t for that basis of trust and confidence, we never could have taken on the bigger challenges of downtown retail and residential and building rehab.”

Downtown today is also a place for tourists, thanks to new hotels.

Place and Marriott Tribute boutique hotels are expected to open by the end of the year, bringing about 200 rooms to the middle of downtown.

While most of the lofts in downtown are market rate, the Macon Housing Authority has also launched an effort to bring affordable housing to the area. The agency recently demolished one of the oldest public housing projects in the city and is now in the midst of a $50 million construction project, the 270-unit Tindall Heights. Built in four phases, the mixed-income neighborhood of varying housing types includes both senior and affordable housing, said Mike Austin, Macon Housing Authority CEO.

“It’s on what we’re calling the Second Street Corridor ,that leads from east to west right through downtown,” said Austin. “It offers people a great place to live close to downtown, close to I-75, as well as the city’s biggest hospital and other services.”